Messi has fondest memories of Celtic Park and can’t wait to return. Lionel Messi has named Celtic Park as the stadium with the best atmosphere in European football.

Ahead of Barcelona’s trip to Paris Saint-Germain in the quarter-final of the Champions League Messi admitted that he has fond memories of the griound from three previous trips in 2008, 2012 and 2013.

Messi scored during his last match in Glasgow in 2012, but could not prevent the Catalan outfit suffering a surprise 2-1 defeat to Celtic.

“I have a Celtic jersey at home,” said Messi. “The games against Celtic were special and I want to remember them.

“It is the best atmosphere in Europe and we all want to experience that again.” 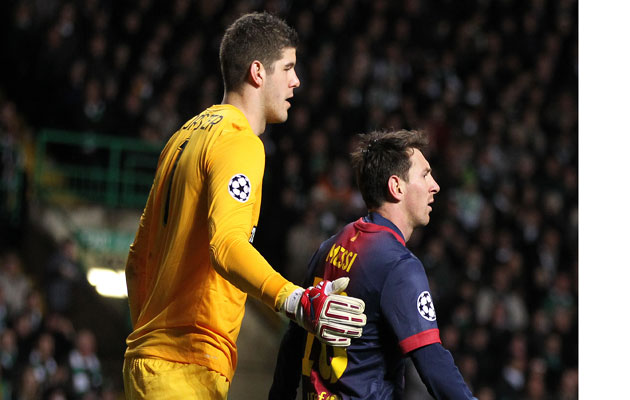 Lionel Messi gets a consoling pat on the back from Celtic goalkeeper Fraser Forster.

Messi admits that he would not have minded seeing the Glasgow club’s former goalkeeper Fraser Forster head to the Nou Camp to replace Victor Valdes rather than join Southampton.

“The performances of Fraser Forster against us were talked about for a long time,” said Messi.

“There was one game in Scotland where he was not human, it is the best goalkeeping performance I have seen.

“When Victor Valdes said he was leaving we even talked about him playing here.

“I was sure he would end up at Arsenal, Chelsea, or Manchester United.

“Celtic Park is a tough place to go to, it is never easy to get a result there.

“We know we would get a tough game if we drew them in the Champions League, but everybody involved in those Barcelona v Celtic games wants to go and play there again.”

Here’s Forster in action for Celtic, including some fine saves againt Barcelona.